After World War II, cinema changed forever. Audiences developed a different kind of sensibility, and suddenly the stories that were being told, usually touched upon very depressive themes rather than  melodramatic ones. European cinema, particularly Italian cinema, managed to completely change the way we react and perceive film as an art form. Italian Neorealism was meant to tell stories that no one dared to tell before. It followed characters who came from poverty and struggle. The camera acted as a reporter, it zoomed in and shined a light on the unseen and the unwanted. There was Roberto Rossellini with his War Trilogy (Rome Open City, Paisan and Germany Year Zero). Then there was Luchino Visconti with Obsession and La Terra Trema. These were movies that came straight up from the ground, from the dirt, the ashes. The protagonists of these movies were the common folk, the poor and lonely. And yet, for me Vittorio De Sica was the one who did it best. Bicycle Thieves, his most famous work and one that is often considered to be the best movie of all time, because of its influence and incredibly audacious vision, opened up a world of post war depression. A world of ruined buildings and unemployed workers. It was honest. His other masterpiece, perhaps his most depressive and heartbreaking one, Umberto D. manages to explore what De Sica left out of Bicycle Thieves.

Umberto D. is a hard watch. We witness as the ground crumbles under an old man’s feet. The world, the city of Rome, the universe, are all quickly changing, and not for the better. Umberto is struggling to survive, eating off the rests of food, sleeping in a tiny room, selling anything of value that he possesses, begging his so called friends for just a dime. His only companion? A sweet, intelligent dog. As we witness a few days in Umberto’s life we start to realize that Umberto’s story is the story of a whole nation, a whole underground world that is still there. We don’t see it. But it’s there. Poverty, starvation, loneliness and death. Umberto wanders around the crowded streets of post war Rome, in search of something, someone.

De Sica, like a true reporter with the eye of an eagle, shines a light on the Italian nation. A nation of poor men and women, of rich and privileged selfish people, of homeless dogs and pregnant young girls. Who would have dared to make a movie like this at that time? Umberto is not just an individual. He’s only used as an example by the filmmaker to paint a tragic, depressive, grim image. The camera tortures us with the old man’s presence. It squeezes him, it works him over and doesn’t let go. Sometimes it almost feels like we’re supposed to be on the side of those who take advantage of Umberto and his beloved dog. We’re forced to watch. We’re forced to breathe and struggle alongside the poor old man. You don’t have to like it, says De Sica, but you must think about it. Because yes, the cinematic screen can be a prison sometimes. You feel compelled to watch the moving image, and yet you also want to get away, go for it and run. De Sica’s movie is like a prison cell. You can’t find the keys to unlock it. You become his prisoner.

Umberto, played as usual (in De Sica’s movies) by a non professional actor, is our unwanted hero. Carlo Battisti, the actor and protagonist, brings the raw credibility, the touch of dirt a movies like this desperately needs to deliver its heavy message. We get a taste of a real poor sob walking the streets of Rome in the late 1940s. He’s our hero. He’s our leader. Battisti with his looks, his powerlessness, his innocence and desperation in his eyes, delivers one of the great performances in the history of motion picture. When he begs for money, we sense the humiliation in his gestures. A man, who maybe once upon a time was some kind of an important figure, a hard worker and bread winner, now stands on the street with his hand stretched out and begs for money. He becomes one of the many bricks in a huge brick wall.

That, ladies and gentlemen, is how you deliver a punch to the gut. By directing and staging what people struggle to see on a daily basis. By delivering what most of us refuse to believe. 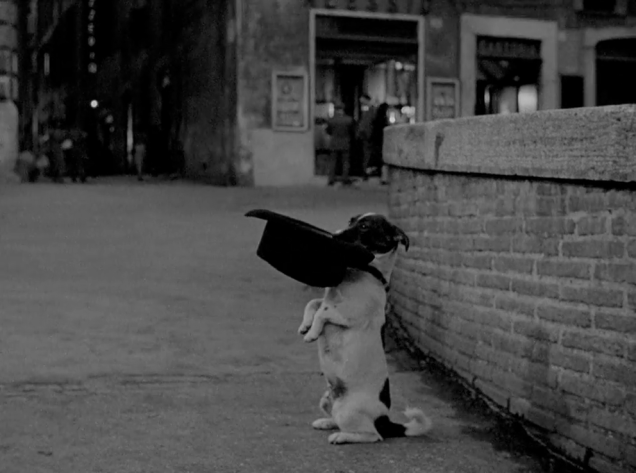