I want to talk about a woman today. There are many women in film. Probably the first name that comes to mind is Meryl Streep. Or maybe Glenn Close. Grace Kelly. Lauren Bacall. Bette Davis. Joan Crawford. Rita Hayworth. Ingrid Bergman. Audrey Hepburn. Katherine Hepburn. And many, many more. However the one woman I cannot stop thinking about since having watched John Cassavetes’ magical Love Streams from 1984, is John’s wife, the great, fearless, ballsy Gena Rowlands. 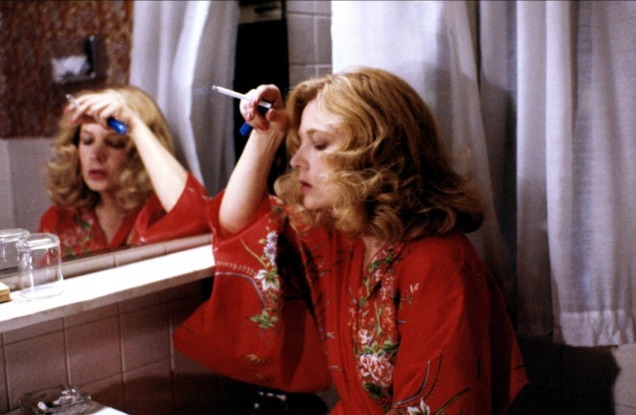 Gena is an actress  whose career in the entertainment industry has spanned over six decades. She is still rolling strong. A woman that always went all out in her roles and maybe that’s why she is so interesting to me. During a time when classic Hollywood always had the same prepared formulas, ways of writing, ways of directing and ways of acting, such a formidable force of nature like Gena emerged at the end of the 1950s and shook the world of film with her incredible attitude. Women at the time were mostly paid to play devoted wives, widows who’d fall for the gardener, objects of obsession and trophy girlfriends. Even the great actresses like Katherine Hepburn and Lauren Bacall played these stereotypical parts at one point in their lives. Then something happened to cinema. The beat generation appeared out of nowhere. The hippies joined in. European cinema and the idea of Cinéma vérité (‘the cinema of truth’, a style of documentary filmmaking) started taking over the once magic film industry in the West. Suddenly all the rules were being broken all at once, and one of the people responsible for this was Gena and her natural approach to acting. Gena was married to the great late John Cassavetes,  master of improvisation and an inspiration to all the New Wave filmmakers and other young explorers like Martin Scorsese, William Friedkin and Francis Ford Coppola. Gena, on the other hand, is still to this day an inspiration to all modern actresses. You’ll see glimpses of her in Cate Blanchett, Natalie Portman, Tilda Swinton and Jennifer Lawrence. The question is, why is that? What was so unique about Gena Rowlands?

Gena was special. She still is. She is 86 years old now and still going strong. Her years of multiple collaborations with her husband in movies like Faces, Minnie and Moskowitz, A Woman Under the Influence, Opening Night, Gloria, and Love Streams made of her a legend of realism in the acting field of cinema. There was something very weird about her. Perhaps the word ‘weird’ doesn’t do her justice. Mad. yes, there was something absolutely mad about her. She rocked the screen. Her characters were always hurt, squeezed into a pulp, used, abused, damaged, and yet she always managed to stand up and face whatever challenge awaited her. She played women with problems because she understood the situations her characters found themselves in. She knew what she was doing and yet we, as viewers, seem to be completely blown away by her spontaneity, sometimes unsure if what she is doing on screen doesn’t reflect her actions off screen. Take A Woman Under the Influence for example; the main character is a loving wife, a dear mother, but most of all a sick, trapped person. Trapped inside her own mind, tormented by her painful condition, crowded by her corrupt thoughts. It’s one the most harrowing experiences to watch her character stumble on the floor, yell at herself, run out on the street wearing nothing but a dressing gown and slippers, wait for a bus that never comes. We cringe, we want to turn it off and yet Gena’s presence keeps us glued. Every character of hers is like a well oiled machine, it just keeps on moving forward, speeding up, never taking a break. In Minnie and Moskowitz, Gena, who plays Minnie, cannot find true love. How do you play a character like that? How to you show to the audience the fact that you can’t find love? Love is not material. We don’t know what love is. So how does she do it? Gena becomes the character. That’s her secret. She puts all the rules, all the laws of golden Hollywood acting behind her and pours her soul into every scene. She understands the character and she understands life. She understands the difficulties a woman faces on a daily basis. Maybe she even understood the importance of her roles. After all, nobody up to that point was interested in seeing a film solely focused on a female protagonist. Every audience member awaited a Rock Hudson, or a James Dean or a Cary Grant to appear on screen and dominate the story. Maybe that was her secret. With each character she brought something new. Usually it was something heavy, difficult to digest and yet, there she was carrying that incredibly heavy burden on her back. Gena felt compelled to do justice to her characters. She never went overboard. There was always a certain limit to what her character could do. As viewers we try to root for her, but that craziness, that madness of Gena sometimes prevents us from doing so. When I watch her, I want to cheer, I want to say ”You go, Gena. Show them how it’s done”. But her characters aren’t Superman. They can’t save the world and they were never intended to do so. They make mistakes, they’re goofy, they’re naive and too honest. They stood out. They were outsiders, and usually we don’t cheer for outsiders, do we?

In most of her roles you get the sense that Gena is crazy, that there is something very unsettling about the way she acts. But that’s what makes her this great, avant-garde actress. It’s the raw truth that she represents, the sad moments and heart breaking finales. It’s the pain, the happiness, the embarrassment, the courage, all fighting one another inside of her mind, her gestures, her voice. It’s her relationship with Cassavetes. A relationship that was built on real love and devotion and understanding. John is one of the reasons Gena was so real. He knew her, he studied her and wrote the finest, most difficult roles just for his wife. And it worked. Gena had and still has that incredible spark of life in her eyes. That’s the sign of a unique, brilliant, fearless actress. A woman that changed the role of women in cinema forever. A woman under a very special kind of influence.

One thought on “Mad Gena”